Meteorological station to be built in Kisii 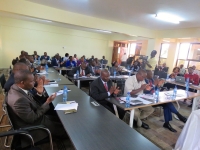 The Kenya Meteorological Department  (KMD) will build a station in Kisii to serve residents.
Following this intention, Deputy Governor Joash Maangi  directed the department of lands to identify a piece of land for the project.
"We take this project seriously and the department of lands is hereby instructed to give the KMD the three acres required for the weather station," Maangi said.
Speaking in a local hotel, Maangi said the station will go along way in giving residents especially farmers updates which will enable them plan their farming well.
"Weather patterns are now unpredictable than never before," Maangi said.
Addressing participants during tvets Lake Region Block  (LREB) Climate Change governance project, the Deputy Governor said climate change was a global problem that should be confronted now.
"Kisii has been affected negatively by effects of climate change. Our climate has variably changed," he said.
Maangi noted that the shrinking of rivers, reduction of water volumes, uneven weather conditions and declining food production were all indicators of deteriorating climate.
The KMD County Director Henry Sese said that the department was committed to bring its services closer to the people.
"The construction of a a meteorological station at Emenwa area of Bobasi constituency is almost complete," Sese said.
The station will broadcast weather messages in Ekegusii, which is the dominantly used language in Kisii, he added.
The department will also have automated weather stations in each of the 45 wards.
In the meeting, Maangi reiterated the resolve of the County government to encourage residents remove blue gum trees from along rivers.
He said the executive order directing residents to voluntarily cut the trees will elapse in two months time.
He encouraged members of the County Assembly to be at the forefront in encouraging residents to heed the directive, for their own good and that of upcoming generations.
The bill which precipitated the order was passed in the assembly. The motion was moved by Mr ....,Nyagoto who is a member of the Environment and Water Resources committee.
Dr Skitter Ocharo who is the CEC for Environment, Water and Natural Resources said issues of climate change needed combined efforts from all departments and agencies.
"In our small ways, what we do will bear fruits," Dr Ocharo said.
The meeting explored ways of ensuring that Kisii is among the six counties in the Lake Region which will get funding to cascade climate change activities.
Dr Ocharo said that three members from the county will represent Kisii in pushing the feelings of the community at the national level in pursuit of funding.
The meeting was sponsored by LifeSkills and Christian Aid, which are supporting climate change activities in Kisii.
Tweet
More in this category: « USAID conducting a study on the African Leafy Vegetables Cases of rabies high in Kisii »
back to top