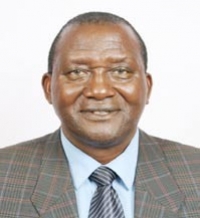 Mr Nyamiobo has a wealth of experience in Public and Private sectors spanning over 30 years.

He has held various senior management positions including Chief Economist in the Ministry of Finance. As Head of Economic Unit in the Ministry of Finance Budget Department, he initiated the first Public Expenditure Review (PER) which set stage to major Public Financial Management reforms in Kenya including Poverty Reduction Strategy Paper (PRSP), Medium Term Expenditure Framework (MTEF).

He has represented the country in many international fora including United Nations General Assembly (UNGA), Economic and Social Council (ECOSOC) of the UN, South –South Cooperation, G77 and China as well as  Economic Commission for Africa (ECA).

He holds a Masters Degree in Economics from Vanderbilt University, USA Specializing in Public Finance, Development Economics and Project Evaluation; a Post-Graduate Certificate Course in core Economics courses from the University of Colorado, Boulder, organised by the American Economic Association; a Bachelors Degree from Poona University, India Specialising in Economics, Political Science and Sociology.

He has undertaken specialized courses in Public Financial management including Financial Programming and Policy from the IMF Institute, Washington DC, USA; Macroeconomic Management and Policy at Harvard University; Fiscal Decentralisation also at Harvard University. In the private sector, he has worked as a consultant for ILO in Somaliland and Puntland on decentralization of Ministry of Public Works and Housing functions to regional and district levels.

He led a team of experts in training of Senior Staff of Federal Transition Government of Somalia by African Development and Economic Consultants on Public Financial Management and Policy.

Tweet
More in this category: « Deputy Governor The Executive »
back to top