Completion of phase one of the Nyakoe modern market

Cabinet Secretary (SC) in charge of Health Sen. Mutahi Kagwe has lauded efforts put in place by the Kisii County…

More than 3,900 youths in Kisii aged between 18-35 years have benefited from the National Hygiene Program (NHP) popularly known… 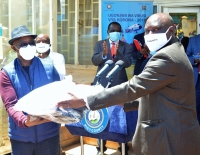 The Kisii County Government has taken drastic measures to cushion the tax payers from economic hardship caused by the global Covid-19 pandemic.

Governor James Ongwae announced the measures on Tuesday among them suspension of penalties for late payments for Single Business Permit, waiver of market dues and monthly stickers for Public Service Vehicles (PSV) and motorcycles and suspension of cess payments for a period of three months.

The Governor who was accompanied by the County Assembly Speaker Hon. David Kombo, the house leadership, County Secretary Patrick Lumumba, County Executive Committee (CEC) members among other leaders made the announcement when he received 5,000 face masks donated by the Kisii Polytechnic. The face masks will be distributed to wananchi across the county.

“The three months grace period in respect of penalties given in the Finance Act 2019 for the tax payer for the Single Business Permits to make payments elapsed on March 31st this year and any payment made afterwards attracts a penalty of five percent per month. My administration waives these penalties for a period of three months effective this month because we understand what our stakeholders are going through this period,” said Ongwae.

The Governor also observed that traders selling produces and other food items in open air markets will be exempted from remitting daily taxes to cushion them against the reduced demand due to the pandemic.

“I have suspended Cess payment in respect of food stuffs including matoke, cereals vegetables and fruits until June this year to cushion suppliers. However, all other cess will be paid as usual,” he said.

Ongwae expressed concerned over the challenges faced by the Public Service Transport Industry in sustaining their operations as the pandemic persists.

According to the Federation of Public Transport Sector (FPTS), noted Ongwae, bus hours have reduced by 40 percent and passenger load factor declined to 30 percent due to the state curfew thereby necessitating the waivers for matatus, buses and motorcycles.

Cabinet Secretary (SC) in charge of Health Sen. Mutahi Kagwe has lauded efforts put in place by the…

More than 3,900 youths in Kisii aged between 18-35 years have benefited from the National Hygiene…

Boda-Boda operators have been identified as a key cog in the fight against COVID-19.