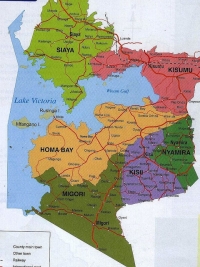 Kisii County is characterized by a hilly topography with several ridges and valleys.  It can be divided into three main topographical zones.  The first zone cover areas lying below 1,500m above sea level located on the western boundary and include parts of Suneka, Marani and Nyamarambe. The second zone covers areas lying between 1500-1800m above sea level located in the Western parts of Keumbu and Sameta divisions, Eastern Marani and Gucha River basin.

The third zone covers areas lying above 1800m above sea level in parts of eastern and southern Keumbu, Masaba and Mosocho.

The most notable features of these topographical zones are hills of Sameta (1970m), Nyamasibi (2170m), Kiong’anyo (1710m), Kiamwasi (1785m), Kiongongi, Kiombeta, Sombogo, Nyanchwa and Kegochi hills.  The general slope of the land is from east to west. The county is dissected by permanent rivers which flow westwards into Lake Victoria.  Among the notable ones are Kuja, Mogusii, and Riana and Iyabe rivers. There are also depressions and valleys.

Seventy five percent of the county has red volcanic soils (nitosols) which are deep in organic matter. The rest of the county has clay soils which have poor drainage (phaezems), red loams and sandy soils. In the valley bottoms, there exist black cotton soils (verisols) and organic peat soils (phanosols).The growth of cash crops such as tea, coffee, pyrethrum and subsistence crops such as maize, beans and potatoes are supported by the red volcanic soils.

The county can be divided into three ecological zones comprising the upper midland (UM) 75%, Lower Highland (LH) 20%, and Lower Midland (LM) 5%.About 78% of the county is arable of which 57% is under crop.

Kisii County exhibits a highland equatorial climate resulting into a bimodal rainfall pattern with average annual rainfall of 1500m with the long rains between March and June while the short rains are received from September to November.  The months of July and January are relatively dry. The maximum temperatures in the county range between 21°C – 30°C while the minimum temperatures range between 15°C – 20°C.

The high and reliable rainfall coupled with moderate temperatures is suitable for growing crops like tea, coffee, pyrethrum, maize, beans and bananas as well dairy farming.

Tweet
More in this category: « Features of Kisii County Demographic Features »
back to top